The Robinson lads: ANZACS in Egypt – the road to Gallipoli 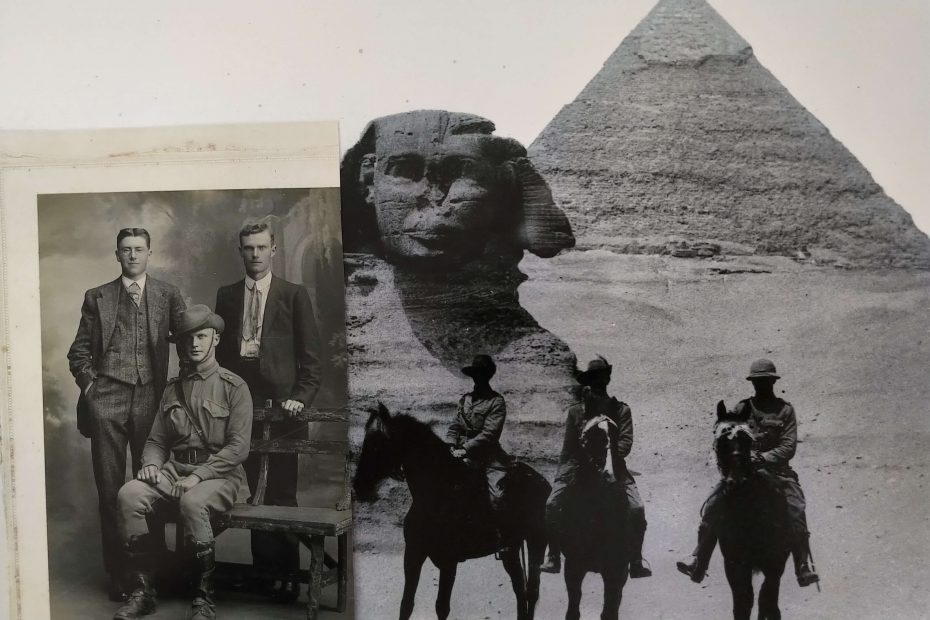 My Grandfather Thomas (Tom) Robinson – the dapper one with spectacles – and his two brothers Wilfred (Wilf) and James (Jim) before the war [see insert photo above]. And then as members of the “light horse” in Egypt before the ANZAC landing of Gallipoli. [photo above]

‘We are camped in the Valley of the Pyramids with two of the big Pyramids in sight. They are an enormous size  – a wonderful piece of work…All the Australian troops except the Light Horse are camped out here. The Light Horse are camped on the other side of town. The New Zealanders are with them…The camp is like a huge town.  It is laid out in streets and blocks and each battalion has a block…We have been making rifle ranges, building latrines, making roads, building mess rooms and a thousand and one jobs which are required in a big camp like this.’

The first men to enlist in the Australian Imperial Force (AIF) were sent not to Europe, as they had expected, but to Egypt for further training and to protect British interests in the Middle East and the Suez Canal.

One of the forgotten wonders of the Great War was how Australia transformed it’s small Army into a formidable Australian Infantry Force ready to land at Gallipoli.

As noted by the South Australian Veterans, although a system of compulsory military training existed in Australia before the war, the standing army comprised of fewer than 3,000 men. This number rose to 50,000 within three months and makeshift camps sprang up all over the country taking over sporting fields and farms.

When the AIF left Australia in November 1914, they were originally destined for England, but with overcrowding and shortages of equipment, it was decided they would spend the winter in Egypt. This redirection meant that only 8,500 Australian and New Zealand troops could be provided with tents, with the rest of the tents not arriving from England until two weeks later.

The camp was set up at Mena, about 10 miles from the centre of Cairo, just on the outskirts of the city. The pyramids and Sphinx at Giza made for a spectacular backdrop as the training camps providing enough space for training drills and manoeuvres for unlimited troops. Within days, British staff in Egypt had arranged contractors to lay water pipes to all the camps and extend tramlines to the prospective depot at Mena. Before the winter of 1914-15 was over, the valley in which the 5th Battalion had camped was full. It was described as being ‘with the hum, bustle, the dust, smell, sounds and lights of a busy city.”

The training was arduous and of a high intensity. Limited leave was allowed in Cairo after hours, as training would be 8 hours a day, six days a week. All day long, in every valley of the Sahara for miles around the Pyramids of Giza there were groups of men advancing, retiring, or squatting listening to their officer. At first, to harden the troops, they wore their full kits with heavy packs during their training, resulting in their backs being drenched with perspiration. As they took their midday meal break, the desert wind blew on them making many of the men sick, some dying of pneumonia.

And this was all before the famous landing at Gallipoli.

On days like today, particularly when I speak to my own sons, I think of how young Tom, Wilf and Jim were when they left for the great war. I also think how lucky all three brothers survived the “great falling” and how easily they may have not. (I often think of my uncle Nick – my dad’s big brother – killed in action in the next “great war” in the famed battle of Briton.)

So on this national day of remembrance I wish to reflect and honor my family’s personal loss and profound connection to our country – our home – Australia.

It is this appreciation of the “ANZAC spirit” that inspires me to do what I can for my clients. So if you or anyone you know has had a visa cancelled or refused, if you are unlawful or just need legal assistance before going to the Administrative Appeals Tribunal or Federal Court talk to us. We understand that a life in Australia is worth fighting for.

Call 03 9614 0218 or email info@arlaw.com.au to make an initial 30 minute consultation at our Melbourne office. (conditions apply)